Improving The Quality Of Innovation 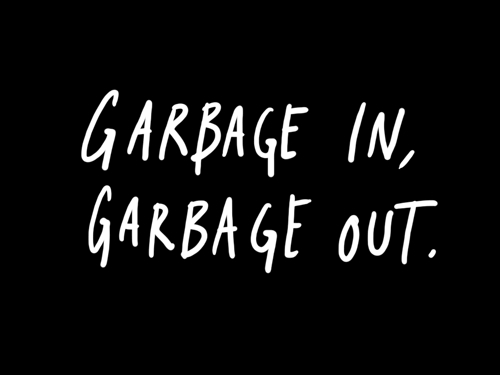 I smiled this morning as I opened an article sent to me by a new colleague. The article started with the following question…

How do you foster innovation across a continent of 54 countries, where more than 2,000 languages are spoken by a billion people?

Great question. And yes, how do you indeed, I thought to myself? The answer to a question like that is worth zillions in any currency of your choice. It’s a similar question to one that’s lived with me for the longest time.

Garbage In Garbage Out

However, building the galaxy’s ultimate innovation process is only one part of the solution. There’s a true-ism in the world of technology, often represented by an acronym…. GIGO. It stands for Garbage In, Garbage Out. Google defines it like so…

used to express the idea that in computing and other fields, incorrect or poor-quality input will produce faulty output

It isn’t difficult to understand. If you don’t have great quality creativity and thinking going into your innovation process, then you can’t expect to get great quality innovation, thoughts and ideas coming out of the other side. It puzzles me that the majority of innovation initiatives I’ve seen and read about, never speak of, nor do they pay attention to increasing the quality of the input. It’s almost as if they’ve been convinced by whomever is selling the innovation process (there’s definitely a consultant involved) that the process will magically produce the goods they’re hoping for.

I suppose that may be true for the first round. There’s a chance that there are some good ideas floating around that are looking for someone to grab hold of and execute. But what happens when you repeat the process in year two? Where is the next crop of great innovation coming from? You’ve used up whatever good quality thinking might have been inside your organisation during the first execution?

You improve the input of any innovation process by improving the creative quality of your people. I’m not suggesting that everyone needs to become an artist or a painter or a dancer. Improving creativity doesn’t require everyone to become a creative. Back to Google for a definition of ‘creativity’:

the use of imagination or original ideas to create something

How Measurement Gets In The Way

I remember once having an opportunity to sell a process, to improve general creativity, to a large Insurance Company. I even brought props along for the panel to test out and try. I admit, I was a little naive in my expectation that they’d obviously ‘get it’ if they could experience what I was talking about. I knew I was not going to be successful when they began to ask about measurement and outcomes. How does one accurately measure the improved use of imagination? Very simply, one does not.

This is why companies spend money building innovation processes that have a start, an end and a bunch of points in between…. because they can measure them, and write reports and when people ask what they spent the money on, they have numbers to justify the expense. Jobs are safe, even though innovation is a little disappointing, but there’s always next year.

Improving the quality of someone’s creativity and imagination doesn’t offer those same benefits of measure. It’s less about measurement and more about trusting that when people engage their imagination the only possible outcome is improved creativity. What else can it be?

Business has a way to go in the area of improved creativity within their organisations. Mindsets will need to shift. What is measured and why, must be re-worked. Better quality input must be seen as more important than a well structured process.

By the way, the answer to the question at the beginning of this post, the question posed by the article I said I’d read?

How do you foster innovation across a continent of 54 countries, where more than 2,000 languages are spoken by a billion people?

Apparently it’s as easy as,

Well, you put together a partnership between a leading business school and an unusual telecommunications company. Then run a competition for the best new business idea using digital technology, and bring the finalists together at a reclaimed industrial site in a township outside Cape Town.

Who knew innovation across a continent was that easy? Like I said, business has a long way to go.